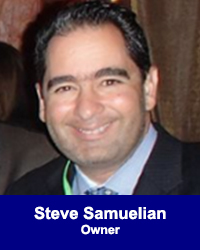 Steve Samuelian, CEO, California Consulting, has held various leadership posts during a career spanning over 37 years. Steve was born and raised in the L.A. area and began his political and civic involvement in Los Angeles in 1982. In January 1995, Steve was appointed as Field Director for Congressional District 19. He was later promoted to District Director overseeing the 19th Congressional District Office staff and District operations for the Congressman, where he served in this capacity for 8 years. In 2002, Steve was elected to the California State Assembly representing the 29th Assembly District. He was appointed to the Assembly Appropriations Committee by the Speaker and served as the Vice-Chairman of the Assembly Elections and Redistricting Committee.

Currently, Steve is elected to the Board of Directors of the L.A. County Business Federation (BizFed) where he is an elected Executive Committee Member serving as an Officer for one of the largest business organizations in the U.S. Additionally, Steve has been the recipient of several different awards from the L.A County Business Federation (BizFed) including the “Ambassador of the Year” award in 2018. BizFed is one of the nation’s largest and most prominent business organizations with many Fortune 500 corporate members.

Steve serves as the Co-Chair of the USC Unruh Institute Ambassador Program http://dornsife.usc.edu/unruh/ambassador-press-release/. In January 2020 Steve was appointed as Vice-Chairman of the Athenian Leadership Council, the primary fundraising organization for the USC Sol Price School of Public Policy. January 2019, Steve served as the Host Committee‎ Chairman for the USC Sol Price School of Public Policy 90th Anniversary Gala at L.A. City Hall. The Price event was attended by hundreds of USC alumni, supporters, and several prominent elected officials. In 2017, Steve was asked to speak to Master’s Degree students at the UCLA Luskin School of Public Affairs and also moderated a panel sponsored by UCLA Luskin in 2016 dealing with the topic of Economic Development in L.A. County.

‎In 2018, Steve was the recipient of an “Outstanding Achievement” award presented to him by the Consulate of the Republic of Armenia in Los Angeles. A tireless worker for Armenian-American issues nationwide, Steve has traveled twice to Armenia. He traveled as an international election observer as part of the Office Organization of Security and Cooperation in Europe (OSCE) delegation to observe the adoption of Armenia’s first Constitution and later as part of a U.S. Congressional Delegation. He received the Armenian National Committee (ANC) Western U.S. Award for Outstanding Leadership. Steve has served on the Board of Directors of a Chamber of Commerce, a County United Way, and a Crime Stoppers organization. He has also been quoted in national, state, and local print and electronic media outlets regarding a variety of public policy issues.

Steve is happily married with two children and resides in Southern California.