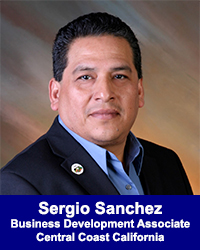 California Consulting LLC is pleased to welcome the newest member our Business Development Team, Sergio Sanchez. He will cover Central Coast California.  Sergio began his career in public service in November 2002 when he was first elected to serve as a member of the Salinas City Council. Sergio was elected to represent District 1 in the City of Salinas, one of the most diverse and densely populated districts in the city and in the Nation. He was re-elected to two additional 4 –year terms in November 2004 and again in November 2008.