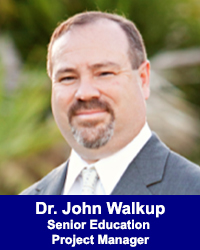 Trained as a professional technical writer, John Walkup has authored a wide range of successful grant proposals, focusing most of his efforts on school-related projects. Over the last four years, John has helped California public agencies retrieve over $18 million in grant funding.

In 2007, he co-developed the concept of cognitive rigor and the Cognitive Rigor Matrix (also called the Hess Matrix), now used nationally to gauge the quality of curricular content. In 2008, he led the two largest studies of curricular rigor ever performed in this country.

John earned his Doctor of Philosophy studying theoretical physics at the University of Oklahoma.